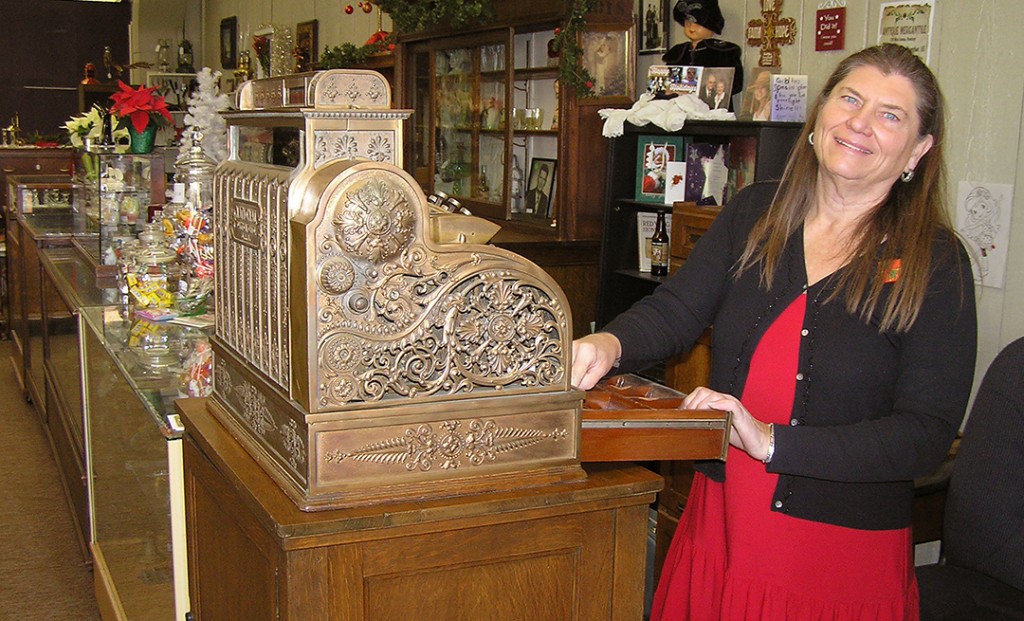 Growing up in Parkston, Lynette (Tiede) Kerlin enjoyed shopping for fabric and groceries with her mother, Verina Tiede, at “J & A Kayser, The Big Store, Parkston, South Dakota.”

It would later bring back the memories and a dream to own such a store herself.

And now she does: Antique Mercantile, 226 Main Ave., Brookings, is up and running.

“I’ve actually had this vision or dream for at least 40 years: to replicate an old mercantile-type store to sell antiques,” Kerlin said. And she knows antiques.

“I’ve been at this a long time,” she added. For 28 years she operated a store called Antique Treasure Company.

If there’s a single episode that was the driving force for her dream, it was a visit as a 4-year-old with her mother to buy clothing fabric at that old mercantile store in downtown Parkston.

Laughing heartily, Kerlin remembers the experience as replete with mind-etching, almost violent, sight and sound – and demonstrated how it was done.

“My mother would pick a bolt of cloth, and the clerk would measure it out on the counter. Then she’d take a scissors and snip into it about one inch. And then she would rip it and there’s that loud ripping sound!

“As a little girl, I couldn’t understand why she didn’t just cut it.”

Kerlin remembered also her mother purchasing meat, which the butcher would wrap in white paper and tie it with a string.

Kerlin lived in Parkston until moving to Brookings in 1970 to attend South Dakota State University. She graduated in 1974 with a degree in early childhood education; however, she had to attend classes at Black Hills State College (Spearfish) to complete “the elementary education block” that qualified her to teach elementary school.

She taught at Central Elementary in Brookings for 27 years, retiring in 2009 “when Central School transformed into (the Children’s Museum of South Dakota).”

Following retirement, she partnered with the owners of the store she has renamed.

Now she’s in it on her own, having opened a new business she stocked and decorated to fit the theme of its name.

On entering Kerlin’s store, the visitor’s eye is likely to be caught by several huge, ornate and canopied display cases that she had kept in a storage unit for the past 15 years.

“They were in pieces. They had to be taken apart to get them in and out through the doors,” she explained.”

Before Kerlin acquired what had been “old general store shelving,” they were in Flandreau, “piles of wood in a barn.”

“It was like putting together a huge puzzle,” she said. “All I had was a photograph.”

She completely refinished the display cases once they were in place in the store.

“I have a general line like a general store would have,” the new proprietor explained as she pointed out the range of her merchandise.

There’s an area dedicated to music where there are instruments that include a ukulele, guitar, zither, clarinet, accordion and a working organ – that is not for sale.

Other items in her main floor inventory include: Red Wing crocks (“more rare pieces if I can find them”); Christmas collectibles year-round; vintage jewelry; and antique jewelry of all types.

Larger pieces include unique and unusual furniture, some of which are not for sale. She needs some of it to help “stage the old mercantile look” of the store.

And the big, old roll-top desk?

“I need that to stay organized,” Kerlin, said, laughing a bit.

The second floor, a loft-like area, she calls a “vintage closet, full of vintage clothing, hats and linens, which are like a lost art anymore. Women of the late 1800s did a lot of needlework. Anything cloth-related is up in that loft.”

Finally there’s the basement, which in a word Kerlin called “primitive.” Think of it as a sort-of man cave, with old hand tools of all sizes and some collectible old pop bottles from the days when Coke came in a 6-ounce bottle.

Reflecting on her new enterprise, she sees finding the location an answer to her prayers.

“I prayed earnestly, because I’d been looking for two to three years for the right building,” Kerlin said. “Within 48 hours (of the building becoming available), I received a phone call from the landlord asking me if I might be interested; so it’s pretty emotional.”

Kerlin is dedicated enough to the theme of “mercantile revival” that she almost used that as a name for her store. Because while she runs her store as a business, she wants to honor her parents, Elton and Verina Tiede. In doing so, she has become a bit of a historian and teacher.

“I feel called to do this. It’s the teacher in me doing this. It would be to teach the younger generation about the old ways, how people lived before electricity and cell phones. Also to show what early retail looked like, felt like.”