“Chemotherapy is the most common treatment for cancers,” explained Assistant Professor Surtaj Iram of the Department of Chemistry and Biochemistry. “However, one of the biggest obstacles to success is cancer cells that acquire resistance to multiple drugs.” As a result, the cancer cells stop responding to these therapeutic drugs. 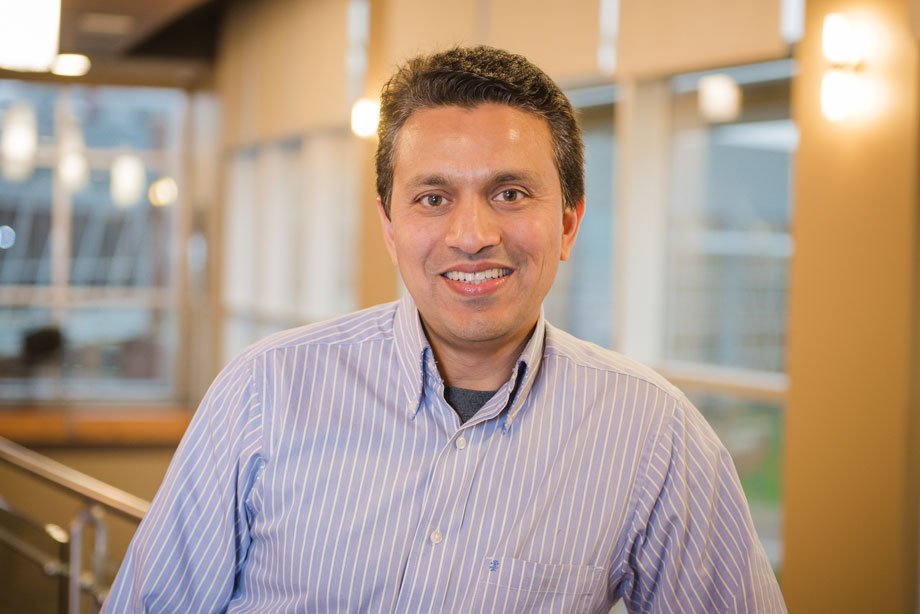 ar, nearly $90,000 grant from the South Dakota Board of Regents, Iram will use a new imaging technique to discover drugs that can disrupt one of the main mechanisms through which cancer cells gain resistance—overexpression of multidrug resistance protein 1, known as MRP1. In addition, he seeks to discover novel drugs that can selectively kill MRP1-overexpressing multidrug resistant cancer cells.

“Our long-term goal is to overcome multidrug resistance in cancer and to improve the effectiveness and reduce the toxicity of chemotherapy drugs,” explained Iram, who has been at South Dakota State for four years. He is one of the researchers working with South Dakota’s BioSystems Networks and Translational Research Center.

Iram has been doing cancer research for nearly 13 years, first as a postdoctoral researcher at Columbia University, then at the Queen’s University Cancer Research Institute in Canada and most recently at the Loyola University Stritch School of Medicine in Chicago. He earned his doctoral degree in biochemistry from the University of Illinois, Urbana-Champaign, in 2005.

“Although cancer cells use different mechanisms to become multidrug resistant, overexpression of MRP1 is a frequently used mechanism in many types of cancer,” Iram said.

MRP1 is a protein on the cell surface that serves as a gatekeeper, he explained. “Any drug needs to go past these gatekeepers.” MRP1 protects the cell by pumping out harmful molecules to prevent toxin buildup.  Other researchers have shown that mice that do not produce this protein are hypersensitive to toxic drugs.

However, overexpression of MRP1 causes the protein to pump out the chemotherapy drugs, thereby protecting cancer cells and making them resistant to multiple therapeutic drugs. MRP1, for instance, plays a role in neuroblastoma, a rare childhood cancer that affects the nervous system.

“This protein has both a positive and negative role,” Iram explained. “We want to shut off the route through which MRP1 clears therapeutic drugs from the cell, but keep the doors open for the positive job this protein is doing.”

Using a newly developed fluorescent imaging technique, Iram and his team of graduate and undergraduate students will screen 386 anticancer compounds that are now in clinical trials and 1,443 compounds that have recently received FDA approval.

In addition, the researchers will use two lines of cells, one that is sensitive to and one that is resistant to chemotherapy drugs, to identify whether any of these compounds might be able to kill multidrug resistant cancer cells.

“Collateral sensitivity is the idea behind the discovery of drugs that can selectively kill MRP1-overexpressing multidrug resistant cancer cells,” Iram explained. “Gaining strength in one area usually creates weakness in another area—everything in nature comes at a price.”

For instance, MRP1 plays a role in regulating glutathione levels. Glutathione is the most abundant antioxidant in the body. If there is less glutathione due to MRP1-overexpression, the cell may be more prone to oxidative damage.

“We will take these drugs that are already in the pipeline and find a new role for them,” Iram said. That will then create an opportunity for a licensing agreement with the company that is developing the drug.